-Side Mission Bug:
Gas Pump side mission DOES NOT give rewards.

Orbital Rail Gun:
Player uses a laser designator to select the area (where it then selects the biggest threat) or the user can lase a specific target, a slug is then fired from orbit down onto the surface at extremely high velocity. Deals very high single target damage, and destroys armor. The rail gun possesses no explosive payload so it has zero AOE capability.

Due to the sheer velocity of the projectile, this ability can reach targets underground or inside buildings.

Gun Run:
A fighter is called into the area to saturate the target area with its rotary cannon. Deals medium damage in a wide area with a low cooldown, optimized for clearing large amounts of weaker enemies, not very effective against armor or larger threats.

Toxic Gas:
Airburst munitions loaded with a toxic gas only lethal to dinosaurs are called into the area that inflict damage over time and reduces their damage they inflict in a wide area. Lacks burst damage, but deals steady damage over time that lasts until the target is dead, ignores armor.

-Issue with Side Missions:

Side missions need some procedural generation in where they spawn. It’s getting pretty stale when all the spawns are in fixed locations and every play through becomes routine and linear which defeats the purpose of the “open world exploration” concept. There’s no sense of exploring the map anymore.

Once you know where side missions spawn it also makes the drone trivial, since the spawns are fixed and never change which lessens their value besides downing them for the 20 research points.

-Proper reticles for scopes and sights. For example the reflex sight really needs a red dot. 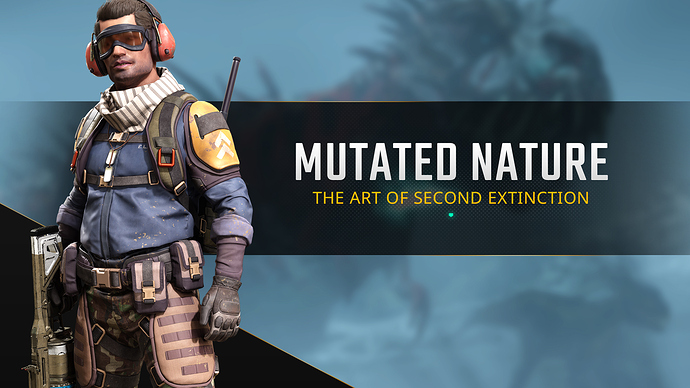 Like nature itself, the art of Second Extinction is both brutal and beautiful. From the marauding, mutant dinosaurs to the eerily familiar scenic landscapes, they roam. From the bouncing fireflies to the chunky futuristic tech, our heroes h...

“Another thing was that they are now kind of living in a post-apocalyptic world. They have relatively good access to gear. Both the existing equipment on the orbital station they live on and what is picked up from different locations on earth by sending people down to collect it using the dropships. However, most combat gear to be found is aimed to protect from bullets and other long-range weapons, not claws and teeth. We wanted their equipment to feel a bit like hacked protection gear from many different sources. Police/army gear mixed with sports gear combined with any other type of protective gear you might be able to find but put together by professionals.”

I think a lot of those ideas would be really cool to have, great work and post!

As for the Side mission bug, I don’t really think its a bug, I believe that your reward is literally all of the dinos you get resources from… but then again, not on the dev team, so I cant say for certain if that was the intention =)